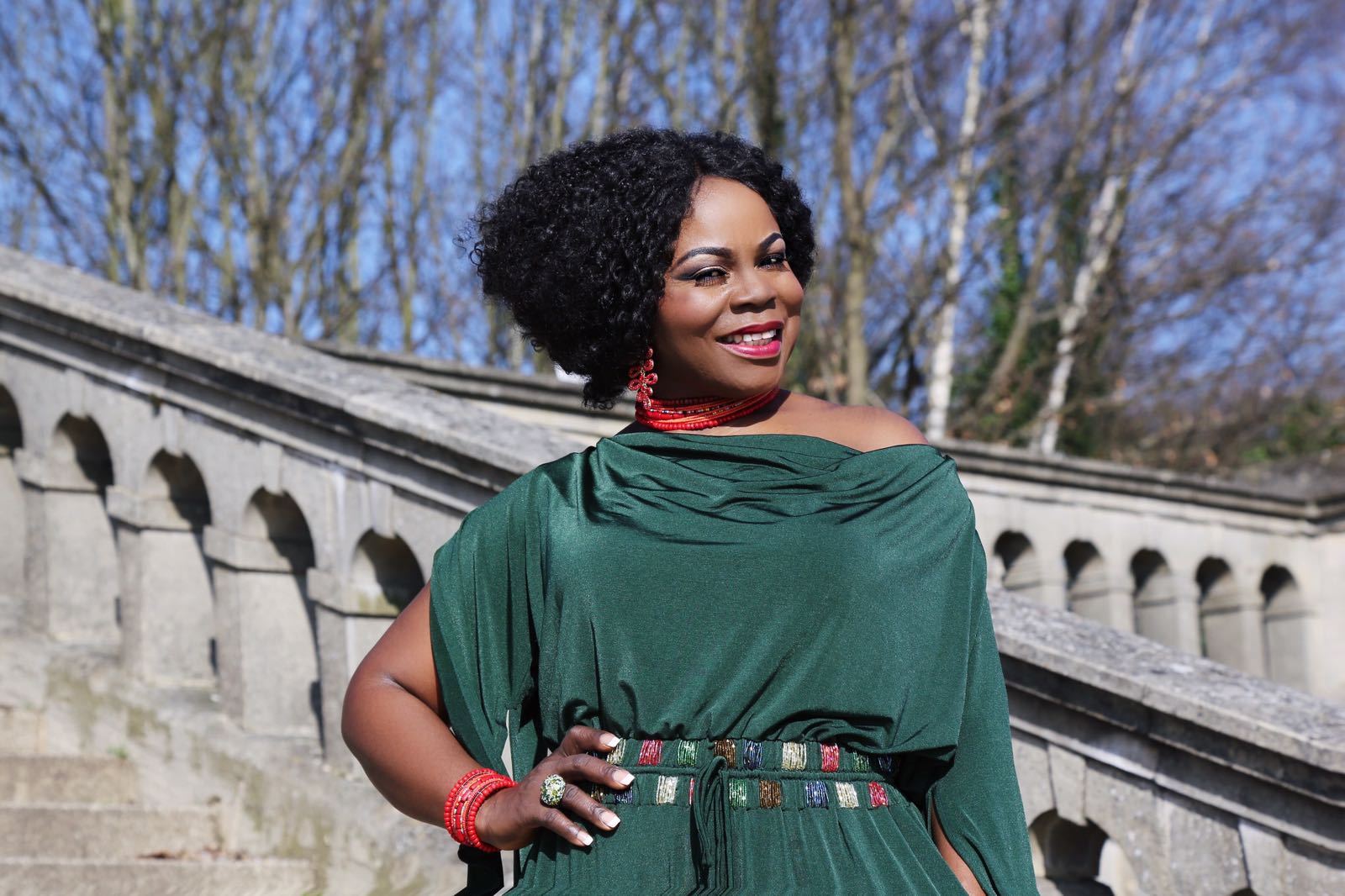 It is no doubt that Isabella is one of the finest female Gospel artistes of Nigerian descent. An ever sprouting vessel of worship, so much that she was labelled the ‘Lady of Songs’ and ‘Isabella Melodie’ – all tags pointing to the ceaseless fountain of in-depth adulation from which she draws her inspiration.

The quintessence of Gospel music diva, Isabella is a shining example who balances the spiritual essence of the music ministry with aesthetics and professionalism flawlessly. Her many awards, books and other milestone achievements are testimonials of the premise.

Isabella, released the critically acclaimed single ‘Hallel’ few days ago and the impact has beckoned on her to tell the inspiring tale of the beautiful – yet divine – moment when the song was conceived.  She sits with Alex Amos for a brief chat and if a picture can tell a thousand words, then the words captured in a moment can reveal a thousand things!

Aside the Hallel-story, Isabella reveals plans for 2 new albums, with production credits to Wilson Joel & Niyi P respectively, a new video directed by Uvi Orogun is also on the way. Moreover, she speaks on her stance on mentorship, family and lots more in this interesting chat.

She did not mince words when she describe the reception of “Hallel” as ‘incredible’ while speaking on the inspiration behind the single.

“’Hallel’ was released on Monday 24 April and the response has been beyond incredible.” Isabella said. “Hallel” was received during a studio session when we were actually working on a different song. This happened whilst I was visiting in Abuja, November last year. One of my daughters (in ministry), Gracia and her husband, Michael, who is a gifted songwriter, came to visit me. During that visit, he told me he had written a song for me as a gift and that he would like me to record the song in the studio. They arranged with a Producer, Niyi P, for us all to come to the studio to record the song. Due to the fact that my time in Nigeria was so short, it was far from convenient for me. Moreover the Lord has given me hundreds of songs that are yet to be produced so my natural response would have been to cancel the appointment.

Anyway, we ended up at the studio that night. It was during the arranging and recording of that song that I suddenly began to sense and hear another sound. Almost immediately I knew without doubt that this was a divine moment. I was literally jolted up from where I was sitting and I began to pace around, breaking out in tongues. I could see and hear the sound clearly. The sound and words (Hallel in groups of four) looked like clusters floating in the heavenlies, almost like they were waiting for someone to grab them! I stopped the other song and asked the producer to keep playing as I was hearing a sound. As I started releasing the sound I was hearing, the anointing fell right there in the studio. That’s how “Hallel” was received. Unplanned and unexpected. And I haven’t stopped singing it ever since.

Although I live in the UK and could have produced the song in more sophisticated studios, I was led to work with the same producer in whose studio the song was received.”

Reacting to the feedback, Abuja based producer Niyi-P, affirms the experience saying:

“My experience working with mama was awesome, till now I am still feeling the aroma of the grace of God in her life”.

Another Gospel artiste Gracia who was in the studio during the recording, confirms Niyi P’s assessment.

“The power and tangible presence of God was visible in the  studio that day. Still revelling in that one experience. Now I understand the term ‘anointed minstrel’ better.

As an offshoot from the release of ‘Hallel”, Isabella has got a lot in the pipe for the year 2017, which includes 2 new albums and a video.

“I recently finished working on my 7th and 8th album.” She explained, “The 7th album titled “Indescribable (The Complete Album)” has a total of thirteen songs, all produced by Wilson Joel (Music Magnate of Doxology Studios).  I recently shot the official video and directed by Uvi Orogun to the first single titled “Omnipotent God” from that album. I will be releasing release the single in July.

“The 8th album titled “A New Beginning” has a total of ten songs, all produced by an Abuja based producer named Niyi P.  “Hallel” is the first single to be released off that project.

“Both projects are now complete and I am excitedly looking forward to sharing the songs with the world. I do love both albums but they are very different sound-wise. “Indescribable” is more contemporary, edgy and universally appealing. On the other hand, “A New Beginning” is more spiritually stirring and more intimate. Having recorded seven albums before it, I can honestly say that I had my most memorable intimate worship moments in the studio whilst recording “A New Beginning”.”

…and just when we thought we’ve gotten Isabella to give us a tell-all chat, she kept a few tricks up her sleeve.

“Both albums have a surprising twist with the last few songs in the albums. I had a bit of an adventure recording those songs but I guess you’d have to wait to find out what the twists are!” Talk about building an intense anticipation!

Isabella was not as acquiescent as one would have presumed a multi-award winning Gospel singer, songwriter and author would have been to give her perception where her brand is concerned. She is of the opinion that “our perception of ourselves can sometimes be very far removed from the reality of how we are perceived externally.”
Nevertheless, as a mentor, Isabella sees herself as reasonably accessible, amiable and relatable person. According to her, “everyone is valuable to God. No one is indispensable and the most important thing one will be remembered by at the end of the day is how they impacted lives (positively or negatively). Those who leave lasting legacies are the ones who genuinely prioritize and invest in people.”

“I do mentor a number of Gospel artists and I do also have a mentor.” She continued. “I take that responsibility very seriously as these people are very important to God’s heart. I consciously and deliberately create time for my mentees. I commit to not just counselling them but praying for them and with them individually as much as possible. I prioritise relationships.”

Isabella’s who did not grow up as a church girl said her liberal years while growing up makes her more sympathetic and a better counsellor as far as ministry goes.

“Due to the fact that I didn’t grow up as a church girl, I had the opportunity to experience life differently from some others who had always been in church.  I think my exposure (to worldly ways and lifestyle) and liberal orientation helped shape me to be less judgmental, more sympathetic of human weakness and more compassionate towards those who have personal or private struggles. I am open minded and able to offer practical counsel without over-spiritualizing everything.”
Isabella is also notable for her sense of fashion.

“I’ve always loved fashion. Not outrageous fashion but I do take pride in my femininity and love to look graceful & elegant. I am blessed that I have my sister as my stylist and fashion designer so I get a lot of stuff for free! (laughs). I think God has blessed African women with a certain body shape, which ironically, our cultural mindset tends to openly condemn but secretly admire! I am bringing this up because the issue of ‘modesty’ in dressing has always been a sticking point for Christian women, especially in Africa.  But that’s a topic for another day. Let’s just say I am not averse to people being trendy.  As long as there are no private body parts on public display, I’m all for it!”

Isabella currently has six albums out with two more to be released shortly. Her first album was released in 2009 and the sixth one in 2015.

“The Lord granted me divine acceleration in ministry, for His glory. Along the way, I have been honoured by many awards which I don’t find necessary to list here. It has been a journey of growth to the glory of God. In addition to the albums, I have authored a book tiled “The Worshipper After The Father’s Heart”, foreworded by the American worship leader, Terry MacAlmon. I have also travelled extensively across the world for ministry, as God has opened doors in Africa, Europe and America. I am enjoying my adventure with the Lord. My relationship with Him is growing deeper and my love for Him is waxing stronger as I navigate my way through life with the help of the Holy Spirit.”

She believes more established Gospel acts who will genuinely commit their time, energy and resources for posterity sake and not as a publicity stunt or for selfish means, needs to take on the role of mentors for the upcoming ones in the ever expanding Gospel music ‘industry’.

While she works on her new materials for the year, her itinerary keeps getting new entries as she has been billed to minister in England, Scotland, Italy, Holland, Texas and Maryland. She is also looking forward to be in Nigeria towards the end of the year.

We expect the unveiling of the album cover arts soon as work progresses on the graphics.

“The albums cover artworks are currently being designed and I am hoping to release the 7th album by November and the 8th one shortly afterwords. I’m also working on my next book titled “The Ministry of Wifehood.

Isabella and her husband Pastor Ogo celebrated their 22nd marriage anniversary in January of 2017 and with the wisdom gathered through experience, they have without a doubt earned the feathers of counsellors

“Myself and my husband have been married for 22 years. We have four children (young adults): two girls and two boys. Our first daughter who will turn 22 years this year graduated from university last year (2016) and our last son is 14 years old.

“My husband, Pastor Ogo, has indeed been the backbone of my ministry in the sense that God has used and is still using him tremendously to support and sustain the ministry financially and spiritually. I wouldn’t be where I am today without his unflinching support and I bless God for his life.”
Watch Lyrics Video: