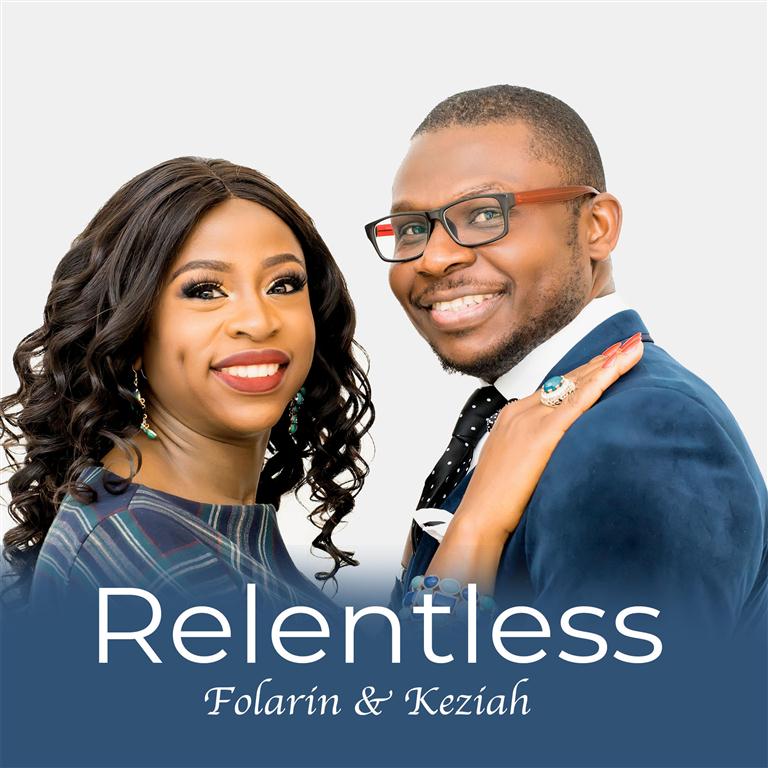 The album involved songwriting contributions from Stephen Lewis and Alynthia Lewis (Legacy Music House). Some of the most sought after production engineers in Canada contributed to the project including Amy King White who recorded the background vocals and instrumentals at Grant Avenue studios, Roy Oomen of Silent Stone Music recorded the lead vocals at ADS Media. Additional vocals and music production were recorded by Samuel Williams at SamSound Production Studios.

The 14-track effort is a mix of multiple genres from Praise and Worship to Contemporary Gospel to Soft Rock, Gospel Funk and Contemporary Christian music. ‘Relentless’ reflects a 5-year creative process and pays homage to the experience of Folarin & Keziah as praise and worship leaders in Nigeria, England and Canada.

The album starts with the triumphant instrumental introductory track ‘The King Is Here’ followed by their first released single ‘Jesus Is Alive’ a high octane, riff-filled and funk-soaked song” (A & R Factory). Other tracks includes: ‘God God God’ which is also a high-energy praise song of declaration on the album. The title track ‘Relentless’ echoes the sound and passion of King Solomon when praying at the dedication of the temple in 1 Kings 8. On this track, Folarin & Keziah sing about their response to the God who always keeps His personal word and promise to love us relentlessly.

The duo also remastered their solo singles ‘You Deserve’ and ‘Surrendering All’ for the album. ‘Mighty God’ their own take on traditional hymn-like symphony speaks about the sovereignty of God and composed as a choir piece reflective of music from artists like Richard Smallwood. In ‘Send the Rain’, Folarin & Keziah offer up a prayer for refreshing, revival and renewal. The track was graced by Apostle Goodheart O. Ekwueme as he delivered the spoken work on Send the Rain’s spoken word track. Staying true to their core and upbringing on old time favorites, the album featured a mash-up of the hymn ‘Marvelous (Stand Amazed)’ on ‘Marvelous’ and ‘Draw me Nearer’ on ‘Deeper and Higher’.

‘You Are My God’ is a declaration about how personal God is and recently nabbed a nomination for the 2020 GMA Canada, Covenant Awards. To take it home, the album concludes with a ‘Relentless Reprise’ and ‘Relentless Outro’ which is a twist of the title track “Relentless”.

This album was written for the audience of one (God) and Folarin & Keziah invite you to join them in this festival of praise, worship and thanksgiving. Relentless is now available on all online platforms and through Folarin & Keziah’s website: folarinandkeziah.com.