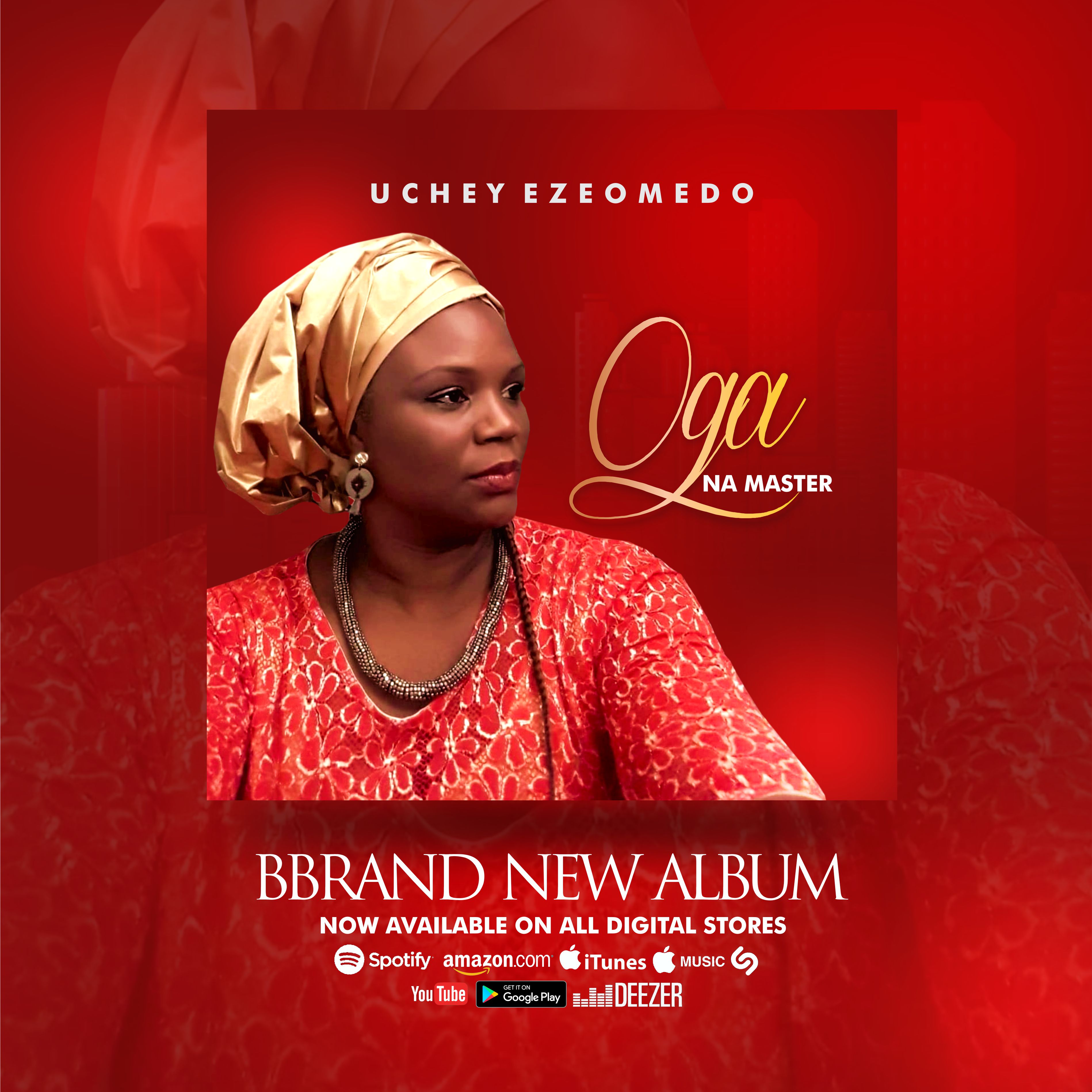 Uchey whose music ministry/career dates back as far back as her early childhood, said; “Growing up in a Catholic family, I was privileged to identify with the junior Charismatic group in the church and it wasn’t long before I began to lead in songs. The group was quite known such that we began to attend charismatic conferences from my village to Enugu city and the surroundings. Everyone saw my singing gift as natural because my maternal uncle until his demise was the music director of the local church”.

Sharing the inspiration behind each song in the album, Uchey said Five of the songs came during worship time and two came in dreams;

“Na obi aka ya” (in his palm) came from my prophetic biblical portion the entire chapter of Isaiah 62. For Zion’s sake I Shall not be quiet… Your land shall no longer be called barren… My first encounter with the prophetic in my final year. That was the bible reference that was said that reflects my life and ordeal. So naturally when I’m encountered with seeming mountainous situations, I go cleaving on God referring to Isaiah 62.

Little or no surprise when it burst into songs on one of the occasions; first as a reggae style and eventually the holy spirit toned it down. I’m therefore not surprised by the testimonies that are already following the songs from the few viewers so far. Even against my anticipation, it’s become the most loved so far”, Uchey said.

“Oga na Master” is an expression of the almightiness of God in a believer’s life. So far it’s the toughest work I’ve had to do with any song.
The first two parts of the melody came to me in my dream and I had to complete it. The beat was more like jazz so I had to think of what to do with it. Seeing that an increased tempo would make it sound like our traditional highlife, I quickly adopted that.

My love for the idea of using a language that was once looked down on to praise the author of languages made me choose pidgin English. Finally my personal experience of deliverance, interventions, grace, power and testimonies in my walk with him influenced the topic and my choice of word. In all its the power of our supreme God meeting us at our choice traditional genre and the lowest expression of our local vibes. I have become all things to all man…1 Corinthians 9:19-23 (though the outcome of the instrumentation was not my original conception, my voicing as well, I hope to get them in remix).

“My First Love” This song expresses overwhelming emotions for the object of our love, lord Jesus Christ. Like rehearsing my own part of the bridal song at the wedding of the lamb.That’s also the strength of the emotion that it carries. It’s so expressed in the wordings. I had decided to do it as high life but I had a change of mind almost at the dying minute because I was concerned that concentrating on the highlife beats people may lose a bit of their attention to the intensity of the confession of our love for him.

“Ekwena ka O gaa” This is also another dream song. It came towards the end of my First ever 14 days water fasting. Only the chorus was given to me so I had to compose all the verses. In the dream I had a stick and was plucking mangoes, two other women were there and were able to share part of the mango even though they didn’t pluck any. Strikingly one didn’t even do as much as say thanks but that didn’t deter what needed to be done which was to give mango because you’ve got the stick.

Then suddenly I was hearing the song from a near distance. Ekwena ka o gaa, e kwena ka o gaa na o ga esiri ora obodo ike. (Don’t let IT escape/ slip away, dont let it escape/slip away cos it’ll be difficult for the masses). The ‘IT’ here applies to every individual but differently depending on your field. Simply put, you’ve got something in your hand that is useful for the masses. Do not let opportunity, talent, skill, position, office, wisdom, etc, slip away; use it to better the masses. Interestingly it’s the first motivational song (without direct religious attribute) That I have received AND ITS SO WELL FITTED FOR THE STRUGGLE OF A NEW NIGERIA, WHERE ALL HANDS HAVE TO BE ON THE DECK TO CONTRIBUTE AND BUILD.

“Yes My Lord” When one has run for a long time from accepting the fact that there is a vacuum waiting to be filled and each time she looks around, the vacuum cries I’m still here. When reality based on the songs you actually sing during church services is different from the realm of songs that God gives you at your prayer place in your closet and like Mary you’ve tried to figure it out by asking the question- God how can this be…? Where am I going to be singing these songs? The people I worship with are not even inclined to these kinds of songs etc…And eventually one goes. As long as you’re the one sending, wherever you send, I’ll go…Yes My Lord. The song first of all came in tongues, and I prayed it for a long time, then the holy spirit started giving bones, sinews, flesh and eventually it came alive. It’s my point of ‘YES’ to every call from God.

“I’ll Praise” Happened to be one of the few that came spontaneously outside of prayer and the dream realm. Just taking a walk and contemplating and boom it came. Unlike some others that I may just capture the melody and then work on when I have time, this was worked on immediately, The choice of the reggae style was influenced by the group that ministered so much to me in my early years. Even though I’m learning afterwards that I don’t have to do all that appeal to me but limit me to my few bests so as to eliminate scattered potential. (If you think it’s true, I will begin to apply it subsequently).

“Kpoo Ya medley” Another reggae, was a pure beckoning to call on the lord and he will answer. (Translated : Call the lamb of God and he will come (2x) He who takes away the sins of the world, call him he will come, he will come. chorus:call him and he will come 2x Call in the morning, night and day, all the time, call him, he will come , he will come.), Followed by fill makeup which is also an outburst of plea for God to refill my tank of anointing. It was taken from David’s prayer of forgiveness. (If I was to redo it, I’ll go for a softer and slower rhythm.).

In general, My album is a sudden answer from God. I thought my music would come to the limelight maybe in three- four years. So upon this discovery I jumped in right in and started work. I take this work to be my breaking limits, training ground, my music classroom, showroom etc. I’m very sure I’ll be getting a lot of positive critiques from your table and I’m ready to work on every new one”, Uchey said.

“Oga Na Master” is now available on all digital stores.