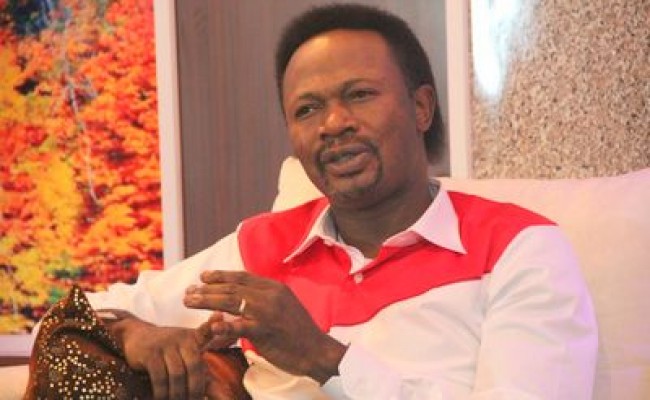 Abuja based prophet, Bro. Joshua Iginla, shocked millions of people on Sunday, August 31, 2014, when he dashed an unknown widow in her 60s his personal 2014 forerunner jeep and cash gift of N300,000 during service.

Information available to ENCOMIUM Weekly revealed that what made the scenario emotional was that the poor widow with four children had concluded plans to commit suicide that day but decided to go to a church nearby for prayers before perfecting the act. But during the ministration, the General Overseer of Champions Royal Assembly, Bro. Joshua stopped and mentioned her case and asked her to come out. She rushed out from the back seat in tears. When he learnt what she was going through and with one of her kids at the psychiatric hospital and her plans to commit suicide, moved to tears, he gave her his new jeep a 2014 Forerunner worth N15 million with registration number Hz2550 ABC, N300,000 and pledged to take charge of the welfare of her four kids.

The poor widow while narrating her ordeal said, “My husband died 27 years ago. The burden has been too tough because his family members abandoned me.”

Speaking on the details to ENCOMIUM Weekly on Saturday, September 6, 2014, Brother Joshua Iginla confirmed the story which has become trendy on YouTube.

“Yes, but please it’s not for a show off. I didn’t expect it but I got the prophetic message that if I don’t mention her case she would commit suicide. They actually placed a curse on her which is why she went through such bizarre experience. That’s why I was led to give her the jeep, cash gift and promises. Why I shed tears was not because I gave her the gifts but because I really understood the pains she has been through. She came with a determination that if God exists, He should intervene in her case, else commit suicide which has been confirmed. And I am glad God proved to her that He exists and cares about the less privileged.”

Humble preacher and General Overseer of Royal Champion Assembly, Bro. Joshua Iginla, dazzled the movie industry and the less privileged when he showered over N50 million as gifts on them during the celebration of his life on Sunday, May 25, 2014, at his ministry’s headquarters, Kubwa, Abuja.

The ministry is based on soul winning, raising a generation of champions, an over comer generation, a generation of bold people with a winning mental attitude, ever ready to face challenges and also pose a threat to the kingdom of darkness.

One of the Sundays at Millionaire Quarters, an elderly woman reportedly slumped and died in the church. Rather than panic, prayer was intensified and in few minutes, by the mercy of God, the woman came back to life. The story spread around the town like wild fire, and subsequently, the church began to experience an overflow of congregation and under four months, God blessed the church with a cathedral, one of the biggest in Byazhin and the church continued to experience so much spread and so much happenings, all manners of miracles, breakthroughs, age long barrenness terminated and healing of all manners. The church has branches locally and internationally and with their own TV station, Champions TV. Brother Joshua, as he is fondly called, is happily married with children.