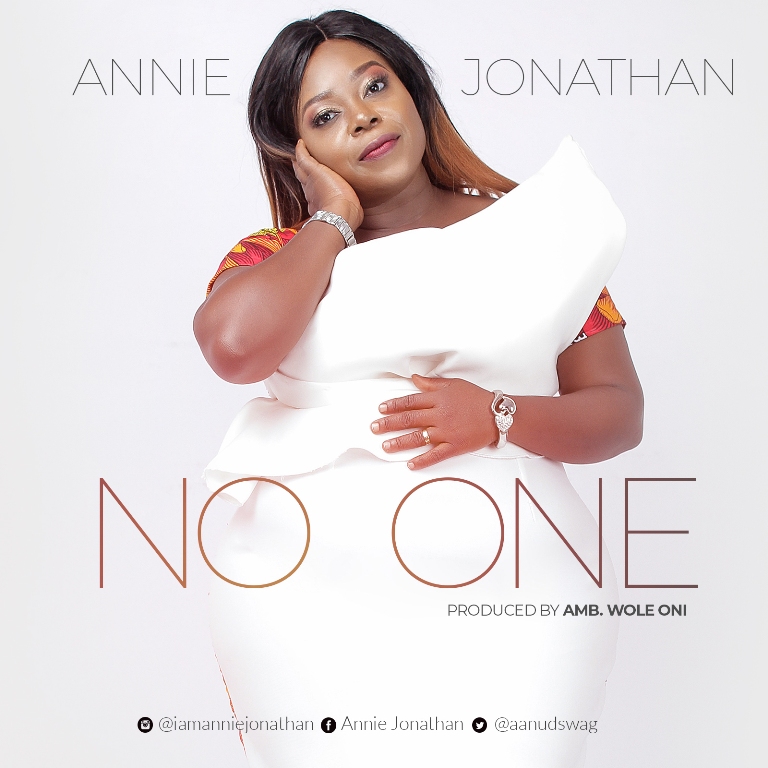 The ebulient and vivacious Annie Jonathan takes centre stage with the premiere of her debut single titled – ‘No One’ – produced by the unrivalled human Faculty of Music – Ambassador Wole Oni.

The single – No One is a fusion of Reggae, Folk, Crunk, Lover’s Rock and Soul – it keeps the listener in an enthralling suspense, particularly with the usage of compound time signature and an irresistible punch that makes your heart feel alive.

There is a burst of freshness that the chorus introduces. The bridge marries African lyrics with western beats in a beautiful synergy.

In her words, Annie shares – ”Every song is a story in a message and vice versa, either directed at God or at man. Therefore, in a tech savvy age and a time that people have insatiable appetite for direct communication and accurate expression of thoughts, No One comes explicit, yet laced with clear-cut fascinating imagery. Clearly revealing that crisp artistry experience is on display in the song.”

In totality, No One proclaims the unquestionable sovereignty of God.

ABOUT
Annie Jonathan (Aanuoluwapo Ayo Okpah) is a Nigerian Vocalist, Voice Coach, Choir Director, Song Composer, Guardian, Counsellor, a Pastor, a Pastor’s wife and a mother of three mighty Nations. She is also a University of Ibadan graduate.

She has always had a knack for music from childhood. This she exhibited with her innumerable effortless song compositions of whatever subject matter that caught her attention.

Her first giant stride towards actualising her dreams for music took place when she joined The Redeemed Christian Church of God Pentecost Parish in 1996. Later on, she became the pioneer Chorister at R.C.C.G. Calvary Assembly still in 1996. There she became a Worship Leader, Choir Leader and an ordained Deaconess.

After signing the dotted lines(marriage) in 2005, herself and her husband joined House of Grace, where she was also a Lead Vocalist and a Worship Leader. In 2016, she started to co-pastor Grace Dynasty alongside her husband, where she became ordained again as a Pastor. Being a pastor did not take her focus off professional singing. It became a tool for greater impact.

She is best known for her energetic stage presence as she is always full of zest, spunk, dynamism, life and unction. Little wonder some call her SWAG.

She strongly believes that if it has to be done, then it must be done excellently.

Her first single, NO ONE, after many years of keeping her fans expectant, was excellently produced by the Faculty of Music in human form, Ambassador Wole Oni.

It spells it out that God is unequalled and His works are wondrous. He is wonderful and so are his deeds.