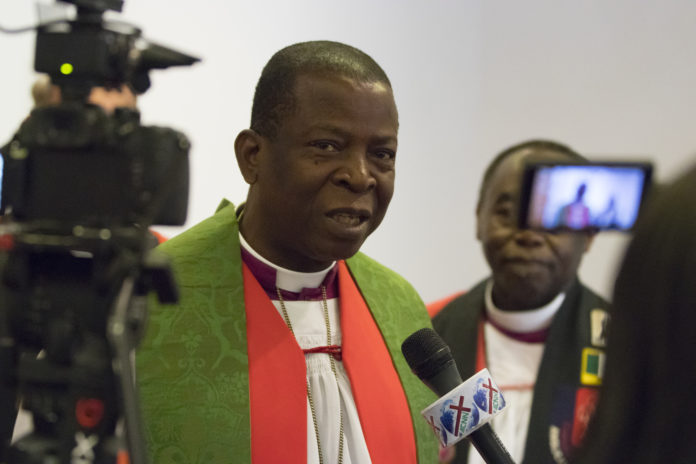 “Gods Gospel has a universal appeal and the Church cannot afford to miss it.

The Church is obligated to proclaim it powerfully and dutifully to the Nations because everyone who calls on the name of the Lord shall be saved. The Gospel is unique because it is the initiative of God. It is received through the revelation of Jesus Christ. The sacred Gospel must be preached for this evil Age to be saved.”

This is the submission of the Keynote address of His Grace the Archbishop Metropolitan and Primate of All Nigeria (Anglican Communion) the Most Rev Dr Nicholas D Okoh to the formal opening of the 3rd Global Anglican Future Conference (GAFCON) 2018 holding at the International Convention Center (ICCJ) in Jerusalem. Speaking on the Theme of the Conference “Proclaiming Christ faithfully to the Nations the Primate said sadly the Gospel has virtually been lost to the nations of the West because the Churches have lost the essence of the Gospel. According to him, in the West, the Human sexuality Palava is preaching another Gospel. Whereas the Biblical Gospel recognises that human nature is radically funny but the West maintains essentiality optimistic view of human nature, no wonder the Church of England is substituting moralism for the Biblical Gospel of Grace.

He said God redeems and recreates the fallen world through Jesus Christ the saviour and king restoring his divine intentions for the creation this include the clear order of male and female and the institution of marriage as a lifelong union between man and woman till death do them part. He advised that the Church in Asia must guide against INCLUSIVISM with the renewal of surging religions and the belief that all religions belongs to God and the Syncretistic interpretations of the Christian Theological facts.

He reiterates that Jesus Christ remains the only way, truth and life and that no man comes to the Father except through Him, adding that this is the core and the way to God. The incumbent Chairman of GAFCON said man is alienated from God because of sin which manifests itself in variety of ways; materialism, idolatry, drugs, alcohol, obsession with sports, sex, religion and success adding that the only solution is to humble oneself before God asking for forgiveness of sin based on the death of Jesus Christ on the Cross and His resurrection.

Primate Okoh said the Church should be on the alert to ensure that the influence of another gospel is not adopted by the unsuspecting innocent believers. He noted that South America contributed immensely to the liberation Theology and Pentecostalism has blossomed there greatly but he cautioned that strides of Pentecostalism must be monitored to avoid elements of another gospel.

The GAFCON Chairman who mirrored recent happenings as it affects the Gospel in all the continents of the world, said that some people preach false gospel which presents Jesus as mere example for human beings rather than the Saviour, by underestimating sin and the reality of judgement thinking that human beings can save themselves and that repentance is merely feeling sorry and not actually making Christ their Saviour noting that a false Gospel is not having gospel at all.

He said Australia is experiencing the impact of the secularisation of the West so too does New Zealand receiving the adoption of another Gospel.

He categorised Africa as laying emphasis on the solving of essential problems because according to him, Africa lives in an environment full of powers, native power and African Science, through which evil people harm others hence in Africa they preach the Gospel that that sets people free from witches, ill -health, diabolical persecutions, evil arrows and so on. As a result of this, he said many Churches emphasize healing, exorcism, breaking of curses, protection from evil and songs of prosperity too flourishing. He said care must be taken that adaptation does not become false gospel.

He said emphasis must be on the eternal realities and implications of the gospel for human existence here on earth, adding that unorthodox and new fast lane theology that does not emphasize repentance must not be condoned, antics of the present generation should not be allowed to undermine the word of God because according to the Primate, any gospel not derived from the gospel is a false gospel propagated by the spirit of the antichrist. He added that the 21st-century believer’s lives Christians must be characterised by obedience to God, and love for God and our neighbours, adding that the position of GAFCON is either the Gospel of Christ or no Gospel at all.

He publicly challenged leaders who contradict the gospel to establish the need to maintain apostolic boundaries, asking the congregation to challenge outright false teaching, dermal of the gospel wherever it is manifested in word and deed.

He reiterated that the same gospel proclaimed by Jesus and His Disciples is the key message of GAFCON to the broken wall of lost men and women who can be rescued only by Jesus the risen Saviour and Lord Of All adding that the major way in which this charge will be carried forward beyond the 2018 GAFCON Conference is the launch of key networks, Theological Education, Church Planting, Global Mission, Partnership, Bishop Training, Youth Ministry, Sustainable Development, and Intercessors Fellowship utterly depending on God’s Grace. He called on all Ministers of the Gospel to wake up from their slumber and faithfully, zealously proclaim the Gospel of God.

He gave an assignment to all the delegates, “Preach the Undiluted Gospel to all the Nations with Pragmatic Zeal”.