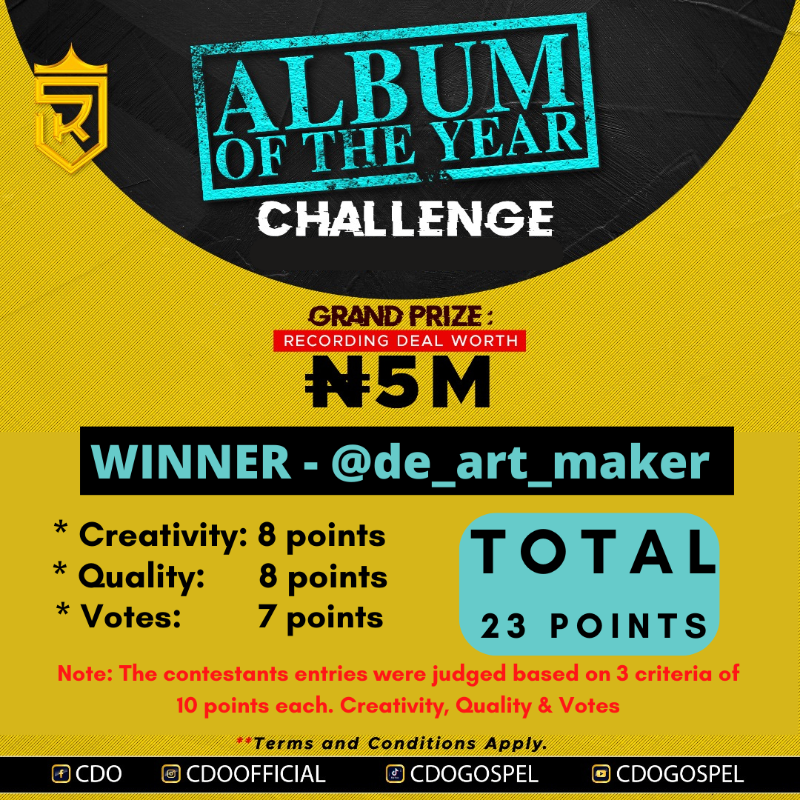 What started out like an expensive joke has turned out to be a reality and dream come true for 2 talented artistes; Daddii & Luccy King, as both emerged as Winner and Runner-up respectively for Rectitude Records powered online talent discovery project tagged ALBUM OF THE YEAR CHALLENGE (#AOTYchallenge).

When gospel music crusader and Christian investor/philanthropist, John Ikeotuonye aka CDO, announced that he was offered a recording and promotions deal worth Five (5) Million Naira to whoever does the best cover for any of the songs off his recently released 12-track album titled ALBUM OF THE YEAR, a lot of cynicism followed the announcement as many doubted if it was real or possible to dole out such an amount. A prize as such would mean the contest is among the top individually funded contests in Nigeria and of truth, there was enough reason to doubt.

But CDO being a man of his words and having gathered the pedigree of over 2 years of consistency with his outreach concert, The Xpression with CDO, and also being a public figure and gubernatorial candidate in the last Anambra state elections, it was easy for some who knew his worth to believe that the prize was very possible and within reach.

About 20 contestants entered the competition by submitting beautiful entries and a rigorous process of voting and selection took place. Contestants were judged based on 3 criteria of 10 points each; which are Voting, Creativity and Quality. All the entries were exceptional but 2 contestants stood out. Meet the winners.

PROFILE: Born on April 23, 1995. in Umuogbu-Agụ, a small village in Enugu State, Israel grew up with a burning passion for music. He started writing gospel songs with his older brother at an early age, joined a local church choir in his teens and his passion for music has only grown since.

Over the years, studying Estate Management at the University of Uyo, he has managed to balance life as a professional singer and a student by recording love songs and motivational alternative music in his spare time when he is not engaged in school work.

He has released a number of songs under the stage name ‘Daddii’, most of which have been well received on Spotify, Apple Music, etc such as “I’ll Rise Up”, “I dey try”, “Can’t give up”, and many more.

As a producer and mix engineer, he has worked with a couple of artists in Uyo as a way of supporting himself through school.

Luccyking was born and brought up in Jos plateau state, into a family of four (4) she is from Nasarawa state. Luccyking who is currently a lead vocalist at Summit Bible Church Abuja has been in the gospel music scene for quite a while.

With beautiful covers and amazing songs like Miracle Happens and Amazing Dawn which have been a huge blessing to the body of Christ and the world at large, Luccyking would stop at nothing in making the gospel of our Lord Jesus reach the unreached through her sound.

She believes music is life and a strong tool to share the Testimonies of our Lord Jesus Christ.

Coincidentally, both contestants did covers for the same song titled “Ekele”, off Album Of The Year by CDO.

PRIZE: The prize is a Recording and Promotions Deal worth N5 Million Naira. Both artists will share the spoils. A song to be produced by a top and trending music producer will be recorded featuring both artists and it would be given top-class promotions.

As you can see, IKE, one of the songs from the Album Of The Year by CDO has already garnered over 2 million streams on all platforms. The winners already have an idea of what to expect from this prize.