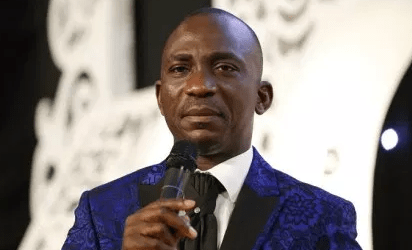 It was the birthday celebration of God’s servant Dr. Paul Enenche, the senior pastor of Dunamis International Gospel Church yesterday during the midweek service in Abuja at the headquarters.

The celebration which was conducted during the two evening services had one of Nigeria’s famous gospel artiste in attendance, which the wife senior pastor’s wife (Dr. Mrs Becky Enenche) said was a surprise for him during the first service same day.

During the ministration at intervals of the songs, Frank made comments like “Angels carry the plane, whenever he fly to any location”, and he also said “I don’t write my songs, it comes complete when I’m in the atmosphere”.

He continued with the talk about his songs coming from God and not written by him, that he don’t have a song book like many other artists. He said to all artists listening to him in the congregation, that their songs can’t be the same like his, because of his own source.

On the podium, when the senior pastor took over, Pastor Enenche sang some other songs by and along Frank Edwards. He concurred to most of the comments from Frank Edwards, of the angels carrying the plane when a child of God flies.

He gave instances of Pastor Enoch Adeboye, the General Overseer of Redeemed Christian Church of God, many years ago when a plane Captain announced a landing problem due to strong storm around, which latter moved to another location, and they were able to land. The Pastor also said the some write songs, while some other receive songs, as he sang one of his numerous songs like “You are the Lord, most high you are the Lord…” and others.