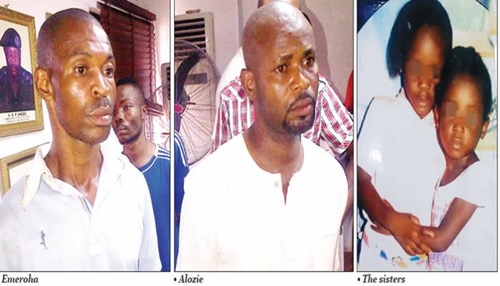 The Nigerian Police in Lagos state on Thursday, paraded a 35-year-old barber, Uche Emeroha, and a prophet, Kenneth Alozie, for allegedly abducting two sisters, – Jumia (6), and Ayomide (4) – who were returning from a summer class in the Igando area of Lagos State around 2pm on Tuesday.

According to a report by Punch Metro, the suspect confessed that the prophet promised to pay him N6,000 if he could abduct and bring two children to his church, Hope in God Healing Ministry in the Agboroko area, Iyana Iba.

Speaking to correspondents at the Lagos State Police Command headquarters, Ikeja, on Thursday, Emeroha said when he went to Alozie’s church for counselling, the prophet promised to fortify him with a charm, so that he (Emeroha) could be bringing stolen children to the church.

“I am not married. I did not know the girls before that day. I worked as a barber on that street. One woman, Mama Chioma, was the one who introduced me to the prophet. She collected my phone number from my girlfriend. She took me to the prophet for counselling. I think she and the prophet worked together.

“When I met the prophet on Tuesday, he asked me to abduct some children. He promised to do some charms for me so that I would not be caught and he promised to pay me N6,000. That was the first time I would run such errand.

“When I came back to the area, I saw the girls returning home. I accosted them and lied that their mother asked me to buy some soft drinks for them. They did not struggle with me. I carried the younger one and held the hand of her sister. Mama Chioma was already waiting at Akesan bus stop to receive them. I recently moved to the area to work as a barber. I was living in Abuja,” he said.

The prophet however denied sending Emeroha on the errand, saying he only prayed for the barber during the counselling.

“I did not know him before that Tuesday. Mama Chioma is my member. She usually brings people, who have one problem or the other to me, so that I could pray for them. I am not a herbalist.
“I was at home on Tuesday when the woman brought this man. I counselled and prayed for him. I only wanted to solve his problems. Later on Tuesday when Mama Chioma brought the girls, she said they were Emeroha’s children and his wife had abandoned him because of his challenges,” he said.

One of the victim, Jumia, told a correspondent that Mama Chioma took her and her sister to an unfamiliar house, gave them food and plaited their hair.

“The man, who took us away, said mummy asked him to buy some drinks for us. He later gave us to one woman. The woman took us on a bus to a place. She put us in one house and gave us food. She gave us rice and soup.
“She later carried us to one man’s place. She also plaited our hair. Later, the police came and carried us to the station. The police now took us back to mummy,” she said.

The mother of the rescued girls, who identified herself as Iya Ayo, said it was a boy in the area who caught a glimpse of Emeroha escaping with the girls.
“My children were found around 6pm in the Agboroko community, towards Okoko. I thanked the God of Christ Apostolic Church. When I initially discovered that my children were abducted while returning home, I searched the whole area trying to trace them.
“I usually grill corn in the area since the death of my husband three years ago. It was a boy in our area who caught a glimpse of the barber escaping with the girls. I also thank the police for their efforts,” she said.

Fatai Owoseni, the Lagos State Commissioner of Police, who paraded the suspects, said the police were on the trail of Mama Chioma, who was believed to have other victims in her custody.

“The woman is also known as chairlady. She is being hunted now. We are going to find out if she does not have other victims. But we have the two suspects – the barber and the prophet – with us. The police want parents to take more proper care of their children to avoid them falling preys to abductors. Investigation is ongoing,” she said.