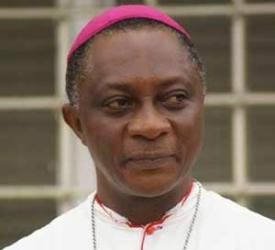 As the fear of the spread of Ebola sweeps across Nigeria, Catholic churches in Lagos have suspended the ‘sign of peace where the congregation shakes hands during mass. While some Anglican churches have suspended handshakes during communion.

The Archbishop of Lagos Adewale Martins released a statement yesterday saying that while the handshakes have been suspended, Catholic priests should continue the traditional hand-to-mouth method of giving Holy Communion for now, but asked the priest to make sure their hands don’t touch the tongues of the recipient. He also said Holy Water bowls usually placed at the entrance of churches should be discontinued to contain the spread of the virus.

In the same vein, the Primate of the Church Of Nigeria Anglican Communion the Most Reverend Nicholas Okoh today suspended shaking of hands during the exchange of the peace. He also suspended the age-long mouth method of administering communion. He said this is aimed at preventing the spread of the disease through physical contact.

For I have given rest to the weary and joy to the sorrowing.
Jeremiah 31:25

INTERVIEW:: "Ebezina" is actually the story of my life – Preye
RCCG ends convention with the ordination of 1,125 pastors
Go to mobile version
Loading Comments...
%d bloggers like this: